This is an incredibly exciting time for the Inter Protocol community - and the BLDer DAO and Agoric communities with the release of Agoric’s Javascript VM - and we’re thrilled to be able to support this moment in the development of the global cryptoeconomy.

At launch the Parity Stability Module (PSM) has been implemented with four stablecoins:

Additional stablecoins can be brought into the PSM via governance. The role of the EC is to determine fees and minting and debt limits, and to provide advice on new assets (stablecoins under PSM-only launch, then any arbitrary assets) under BLDer DAO community consideration.

The EC considered technical, economic, and legal risks of each asset. It also sought and considered recommendations from Agoric OpCo, and from the DCF which will be supporting the launch with an incentive program.

The EC also considered the availability of liquidity for each asset in the interchain ecosystem. Liquidity is relevant for IST bootstrapping (we want to make sure our early minting limits can be reached) and for potential short term risk (low liquidity of an asset might reduce arbitrage opportunities).

The EC concluded that the minting limits should be staggered in two phases as a prudent method of managing risk at launch.

Phase 1:
As soon as possible after the upgrade and deployment of the PSM contract, the total IST minting limit will be IST$500,000. This will consist of the following assets:

Phase 2
No less than a week later the EC will raise the mint limits to IST$5,000,000, consisting of the following assets:

We are coordinating with Agoric OpCo and the DCF to launch Phase 2 at the same time as the release of BLD incentives on Osmosis. We expect that to occur 7 days after Inter Protocol launch.

The EC will meet regularly to consider market conditions and the appropriateness of the minting limits that have been set.

Hey, to my understanding, right now there’s no overcollateralization of IST, no liquidation mechanism, and no Reserve pool yet. Thus, would it be correct to assume that the only defence mechanism against an event during which IST becomes undercollateralized(bridge hack or a USDC/USDT depeg) would be additional BLD issuance by BLDer DAO? And there’s no guarantee that BLDer DAO(as holders and stakers of BLD) decide to issue these additional BLD, but if they do, that would create up to several millions worth of sell pressure on the BLD token(could create a death spiral?). If I were a BLD or an IST holder, all of this wouldn’t sound safe to me(especially with a 5M mint limit).

Yes - your understanding is correct (as an aside - thanks for tracking the roadmap well! Appreciate good questions like this). Bridge risk is an unfortunate reality for the PSM for now. Deciding that the risk is too high until those additional features release is certainly a reasonable personal choice.

However, worth noting that there’s ~17m Axelar bridged USDC in a single Osmosis pool that’s equally exposed. Similarly, Canto recently had ~15-20m bridged USDC and USDT farming immediately after launch. So, to me, 5m total spread across assets and bridges seems comparatively conservative early on.

All that doesn’t change that the heavy early reliance on bridges is a concern which must be mitigated as soon as possible.

I see, in that case I’d suggest taking some BLD from the Community pool and putting them into the Reserve pool(if that’s possible), so that, if there’s an emergency, there would be no need to wait for a vote to issue new BLD, which could help to avoid a depeg. Also, IMO it’d be beneficial to add rewards to the BLD pool on Osmosis - that would both incentivise users to hold/LP their rewards from the IST pair and increase liquidity of the pool, which could be crucial in case of additional sell pressure.

The Community pool is controlled not by the econ committee but by the BLD stakers as a whole. You are of course welcome to make such a proposal. Note also #14 Agoric Community Fund Policy passed 2022-08-27.

You would have to clarify what you mean by “the Reserve pool” and especially what is the governance process for taking assets out of it. The Inter Protocol whitepaper (section 2.4) discusses a contract by that name, but it is yet to be deployed.

The Economic Committee has voted and raised the minting limits for the Parity Stability Module, as outlined in the original post! 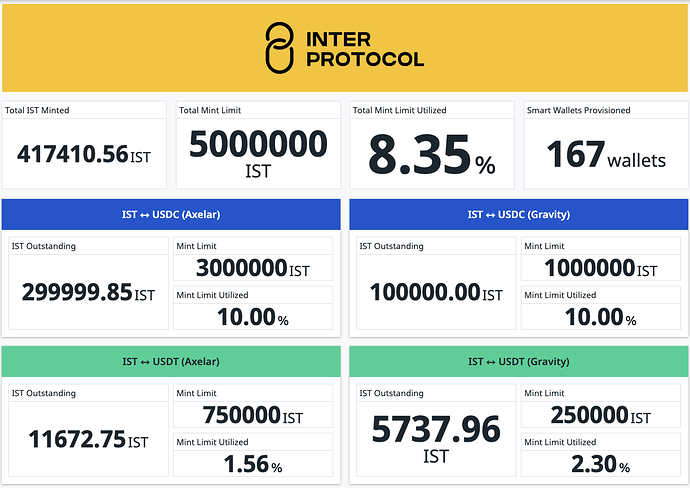 Anyone who is interested can see that sweet IST Dashboard by visiting https://analytics.inter.trade/

Chiming in super late here. But I have a very simple question, why are we bringing USDT into the mix? Do we really think the liquidity is worth the risk…

I absolutely do not.

You are asking for trouble when, not if, tether collapses.

I like the way that the current capital composition design diversifies based on bridge. Of course, I’m very looking forward to native USDC from the hub, and to a more multicollateral version of this IST concept.

Recently and unexpectedly, I found myself exploring the design space for IBC stable coins. On Twitter, I have mentioned a fork of IST, called FIST.

Basically it would reject any blacklistable asset. It’s my understanding that the liquidation mechanism that IST uses is not yet fully baked and that’s why it’s currently being backed entirely with traditional fiat stable coins. I’m definitely in favor of taking the time to bake it well because once we introduce additional assets, we are introducing real risk.

The thing that drew me here is the exploration of the idea that governance tokens really should be used more for alignment and less for money. Of course, they are where the value should accrue to because it’s the sole token that represents an investment in the community itself.

I think that it might be possible to build an incredible public good for cosmos, possibly as an SDK module, that allows for any chain to issue its own stablecoin, overcollateralized. Arb tooling should be released at the same time as the other code, to ensure that markets move rapidly.

This is a nascent idea that I’m chasing and if anybody would like to discuss it, I think that the best way to do so is to send me a Twitter DM, and I will add you to a group called the hellscape. In the hellscape, we are discussing the nature of cosmos layer one staking and governance tokens.

So that leaves us pretty much with just USDC.

Not sure you’re aware but USDC will be issued natively on Cosmos through Interchain Security (Launch: January 2023), secured by the Cosmos Hub. It will be a generic asset issuance chain that can be used to natively issue other assets. Can definitely put you in touch with folks managing Interchain Security to explore this. 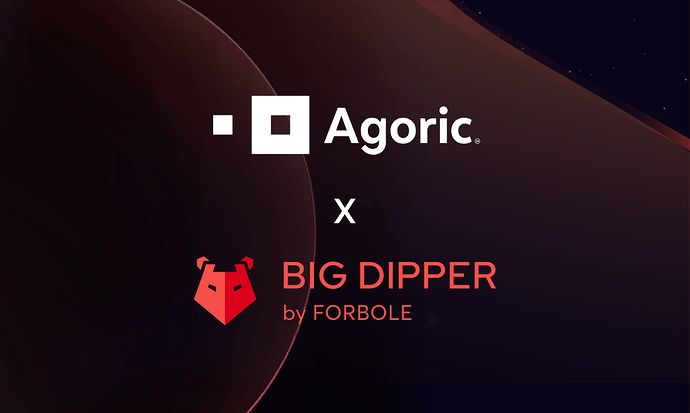 Big Dipper is an open-source block explorer and token management tool serving over 10 proof-of-stake blockchains. It has been forked more than 100 times on GitHub and has served audiences from 140 countries and regions.